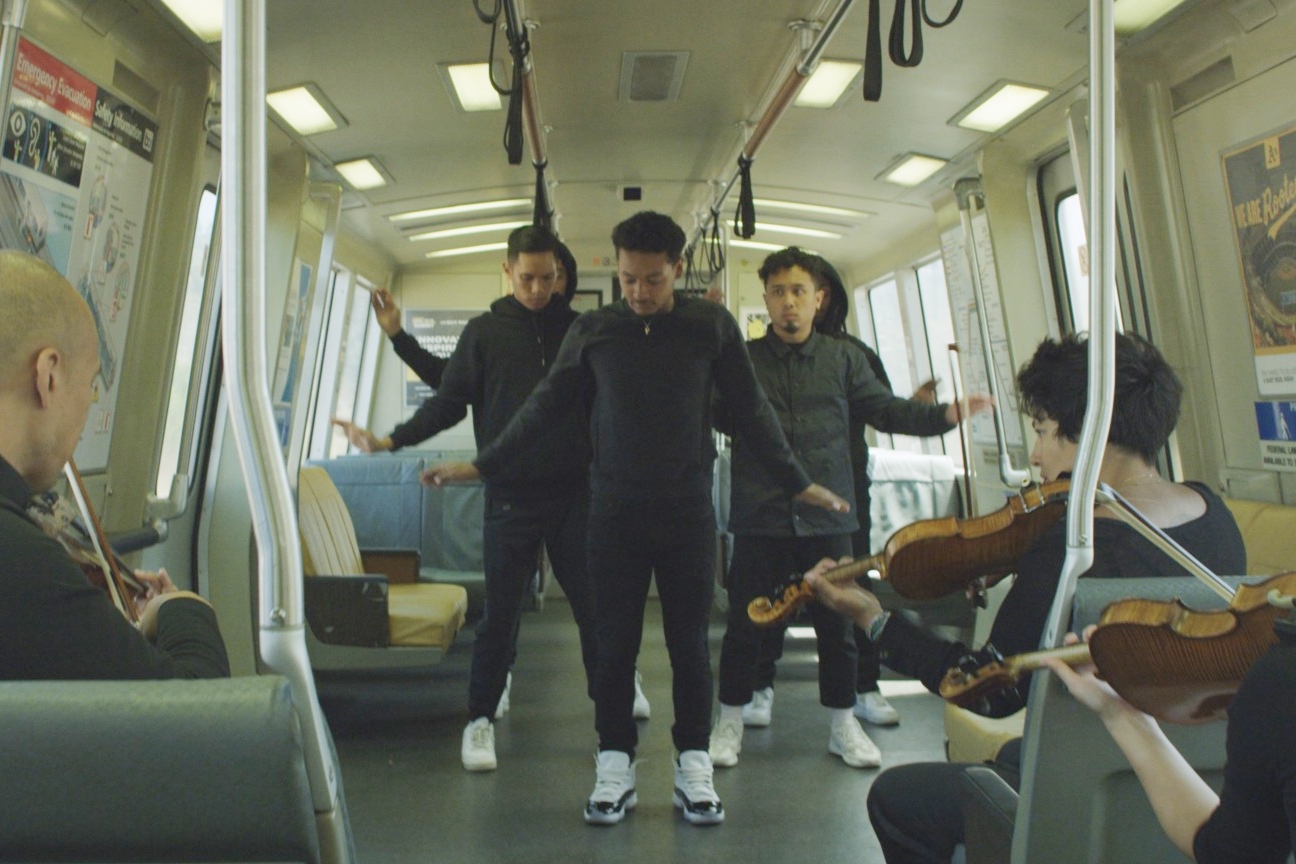 If you’ve ever driven BART in Oakland, you’ve probably heard this line, immediately after a team of dancers treated the car like a jungle gym while hazy hip-hop beats played from a boom box. But you’ve probably never seen those same moves on an empty car, accompanied by a string quartet.

Premiering at SFFILM last month and screening at the Center for Asian American Media Fest on May 22, “Mud Water” is a 30-minute film that highlights Oakland’s unique turf dancer culture, while combining elements of surrealism and contemporary choreography. Director My-Linh Le, 35, with a master’s degree in dance, drew inspiration from both her studies and the time she spent in the Bay Area and participating in the community dance. A grant from the Phyllis C. Wattis Foundation provided much of the financing for the film, which looks much sleeker than its $18,000 budget suggests.

Although turfers are the focus, Le’s style is called popping, which began in the ’80s with dancers grooving to the music of The Gap Band and Parliament. She was the first woman recruited to join Playboyz Inc., a San Jose team established in 1981.

“Turfing takes a lot of techniques from popping, but it’s a completely different dance. A lot of fundamental moves come from dances that people have done in particular neighborhoods,” Le says. “So there are a lot of moves named after the specific street or neighborhood they come from.” For example, a sliding move called Brookfield is named after the area of ​​Brookfield Village a few miles northwest of San Leandro.

“Mud Water” opens with a group of dancers hanging out in an Oakland living room, passing a joint while one of them slowly twists his body in the center of the room. His shoulders swivel at angles that would make a chiropractor uncomfortable, accompanied by pensive ambient music. When the short routine ends, one of the guys on the couch makes a joke about not even knowing how to spell “contemporary” dance.

Then another friend grabs the joint and starts telling a fable about a man who gets tired of his shadow. The scene changes to a desert landscape, with a group of dancers writhing on the sand. The same moves you might see in a BART car are treated with the artistic respect typically reserved for professional dance companies, rather than presented as mere cheap tricks to loosen commuters’ wallets.

“When I think of turf and turfers, I know it’s more than just fancy stuff. It’s a whole lifestyle, and it’s a whole social movement,” Le says. got sick of movies that portrayed dance in a very fanciful way. I wanted to bring the dance to the screen in a way that felt more accurate to me in terms of what else the dance could be.

Although Oakland has a huge stage for dance events and competitions, the biggest stage might be the BART car lanes. Filming on the transit service posed a host of challenges for Le and his crew. They got permits to shoot at the docks, but even with a BART representative present, a passenger sent an angry email within five minutes. The real car scenes were shot more in a “documentary style” and were even more unpredictable.

“We’ve done this before, where we had violinists and a group choreographed routine,” Le said. “It wasn’t our first rodeo, but it’s always very difficult, you never know how it’s going to be. It’s a bit the nature of turfing, everything is improvised, people get away with it unexpectedly. And usually the magic happens, but every once in a while it crashes. So it can get very stressful.

From BART cars to graffitied alleyways to the East Bay coastline, the film is a love letter to the culture surrounding Oakland’s dance community. But Le, who is of Vietnamese descent and now lives in Sacramento, realizes that despite his time dancing in Oakland, documenting the scene is complicated, and screening the film at an Asian American film festival even more so.

“I was afraid that I would run into stuff about this not being an Asian American story. Because I dealt with some of these issues, about what appropriation is and when it it’s not,” Le said. “That’s definitely my focus, the whole story is from my very specific point of view. Is this a true Oakland story? I think that’s a question for people who grew up here and are 100% Oakland.