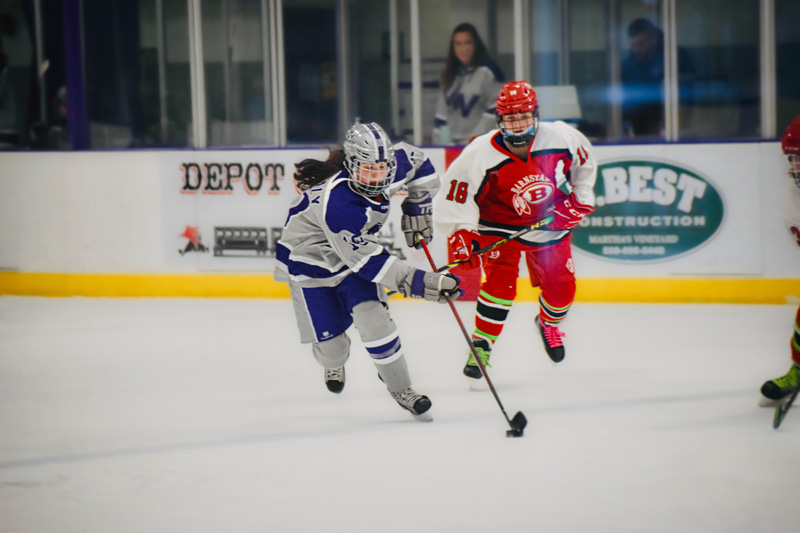 The Vineyarders hockey teams are progressing towards the end of their regular seasons, with a few triumphs and losses against league rivals teaching the players valuable on-ice lessons.

Men’s hockey coach Matt Mincone told The Times that last week the men’s team played Hopkinton on Feb. 15 at home and, after intense up-and-down play, won 2-1. “It was kind of like I expected,” Mincone said. “They’ve always been a tough team, but we’re playing at a pretty strong level right now.”

During this match, a line represented the score of all the teams. MV scored in the first minute with a goal from Finn Lewis and assists from Will Bruguiere and Nick Ben David – a quick start to sink the purple pride. “That line has gelled pretty well lately,” Mincone said. The second game-winning goal was scored by Bruguière, with assists from Charlie Lakis and John Coogan.

The next day, the 16th, the team traveled to Nantucket in good spirits. Had they beaten the other island, they would have shared the league title and also erased their previous defeat.

The Vineyarders emerged 3-1 winners. Mincone said it was a good game from top to bottom, with a solid effort from goaltender Graham Stearns.

“Nantucket is a disciplined team for the most part and played a pretty solid game. It seems like over the last few years we’ve gone there and beaten them, and they’ve come here and beaten us,” Mincone said.

The Vineyard men’s team will face Dennis-Yarmouth on Wednesday, February 23, as The Times goes to press.

Mincone said the performance at the Fairleigh Dickinson Tournament is always a “completely different click on the dial”, with Plymouth North beating the MV team, 2-1. The team learned a lot in the first half of the game, Mincone said, but ended up being overwhelmed.

The team has already qualified for the state tournament and will soon find out about pairings and brackets. Following Wednesday’s game against Dennis-Yarmouth, Barnstable hockey will be at the Vineyard for senior night, where the skills of MV players will be tested.

“These guys did a great job. I know we just lost the last two games, but from a coach’s perspective, you have to learn how to lose the right way,” Mincone said. “I’m looking forward to having these next two games under our belt, hoping to get back into the winners column before entering the state tournament and then making some noise there.”

Women’s hockey coach Geoghan Coogan told The Times in an email that the team fell short against Latin Academy on Friday, Feb. 18, which was senior night for lone senior Lila Mikos. The players started a little slow in the first half, Coogan said, and fought until the end but couldn’t score enough to claim the victory. On Monday, February 21, the MV Girls took on a tough team from Norwood – a top 10 team in the division. Like the girls have done all season, Coogan said, they haven’t given up and will continue that mentality with their final regular season game on Thursday, Feb. 24 at home against rival Nantucket.

“While we were hoping for a few more wins at the end of the season, we’ve made a number of super positive milestones as a program and hope to continue with a strong finish,” Coogan said.

Out and About WRAL.com