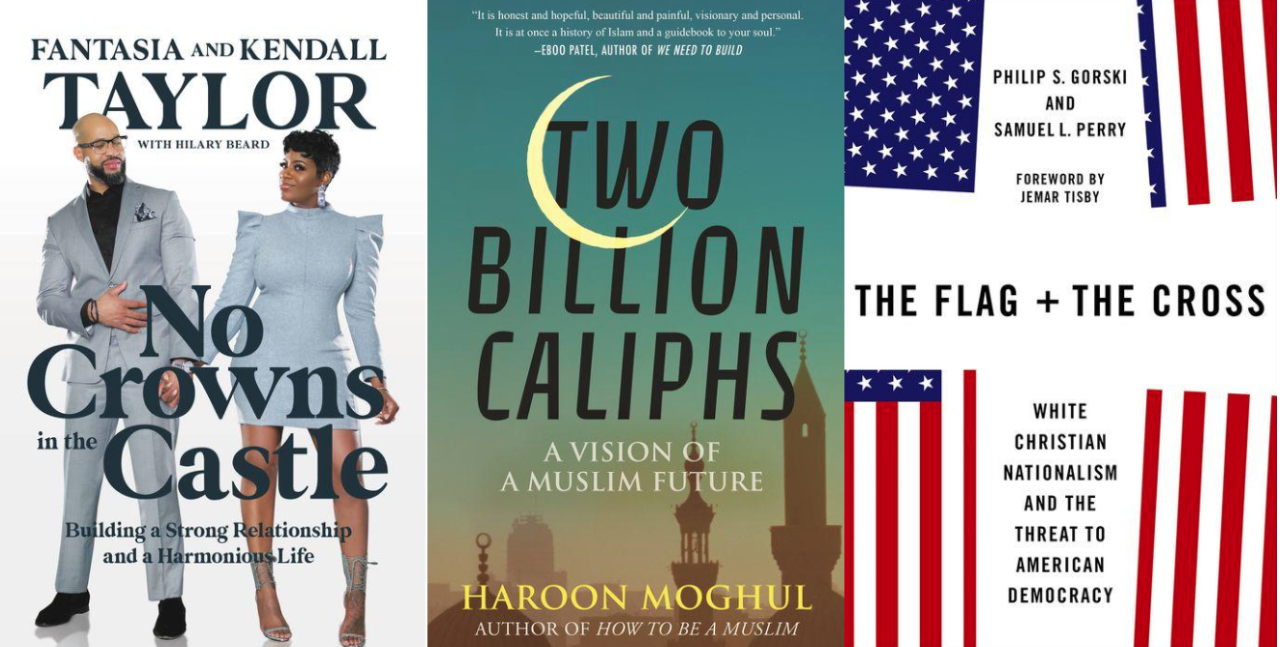 american idol star Fantasia Barrino Taylor and her businessman husband Kendall Taylor share lessons on marriage in No crowns in the castlea new commentary by Karen Swallow Prior, and other new books will be published by Religion and Spirituality publishers in April.

The Flag and the Cross: White Christian Nationalism and the Threat to American Democracy by Philip S. Gorski and Samuel L. Perry (Oxford Univ., $22.95, ISBN 978-0-1976-1868-4). Sociologists Gorski and Perry take a critical look at the mixture of Christian images and what they call anti-democratic actions, from the earliest days of American history to, and beyond, the 6 January at the United States Capitol.

A New Paradise: Death, Human Destiny, and the Kingdom of God by Harvey Cox (Orbis, $28, ISBN 978-1-6269-8458-5). Theologian Cox turns to the Bible and his own life while exploring ideas of heaven, the afterlife, and Jesus’ concern for love and justice.

How Religion Evolved: And Why It Lasts by Robin Dunbar (Oxford Univ., $29.95, ISBN 978-0-1976-3182-9). An evolutionary scholar explores how spiritual thought and rituals have emerged and diverged in human society, why some are more inclined to be religious than others, and the impact of this impulse to believe.

You are gods: of nature and supernature by David Bentley Hart (Univ. of Notre Dame, 2022, $25 trade paper, ISBN 978-0-2682-0194-4). Eastern Orthodox theologian and author Hart presents metaphysical meditations on his idea that nature and the supernatural form a unified whole.

Two Billion Caliphs: A Vision of a Muslim Future by Haroon Moghul (Tag, $25.95, ISBN 978-0-8070-2465-2). Muslim professor and essayist Moghul reflects on Muslim theology and looks forward to suggesting how followers can reclaim their faith with a new interpretation of Islam.

The Scarlet Letter: Reading and Reflection Guide by Nathaniel Hawthorne, with commentary by Karen Swallow Prior (B&H, $17.99, ISBN 978-1-4627-9668-7). English teacher Prior examines Hawthorne’s work through an evangelical lens, adding footnotes, questions for reflection and more alongside the full original text.

Evil present, God active: can the evil of this world ever be resolved? by Jered Gritters (Blackstone, $15.99 business paper, ISBN 978-1-0941-4948-6). Drawing on theology and philosophy, Gritters argues that God is always working to resolve mankind’s struggle against evil.

Buddha and the Bard by Lauren Shufran (Mandala, $16.99, ISBN 978-1-6472-2456-1) promotes a dialogue between Western and Eastern ideas of the human condition by linking Shakespeare’s views with the philosophy of the Buddha.

Heretic: Savior, Lover, Killer – The Many Lives and Deaths of Jesus Christ by Catherine Nixey (Mariner, $28, ISBN 978-0-3586-5291-5) examines many diverse versions of Jesus from early Christian traditions and how they were shattered by Christ’s vision of fourth-century Christian orthodoxy .

How to Heal Our Racial Divide by Derwin L. Gray (Tyndale Momentum, $22.99, ISBN 978-1-4964-5880-3). Pastor Gray posits that God desires a multi-ethnic, loving Christian community and looks to the Bible for guidance.

Journeys to Heaven and Hell: Visits to the Afterlife in the Early Christian Tradition by Bart D. Ehrman (Yale University, $32.50, ISBN 978-0-3002-5700-7). Ehrman traces current ideas about ethics, faith, the meaning of life, heaven and hell to Greek and Roman poetry, early Jewish writings, and Christian apocryphal texts about the afterlife.

Jesus and Gender: Living as Sisters and Brothers in Christ by Elyse M. Fitzpatrick and Eric Schumacher (Kirkdale, $24.99, 978-1-6835-9587-8). Unlike today’s culture wars over gender roles, the authors cite Jesus’ model of service with love and humility for both men and women.

Anxious Experts: Disaster Response and Spiritual Care from 9/11 to the Climate Crisis by Joshua Moses (Univ. of Pennsylvania, $29.95, ISBN 978-0-8122-2513-6). An anthropologist tracks the rise of spiritual expertise – ranging from meditation to social justice activism – in dealing with trauma over the past two decades.

Become One: Heal Your Past, Transform Your Relationship Patterns, and Return Home by Sheleana Aiyana (Chronicle Prism, $27.95, ISBN 978-1-7972-1167-1). Aiyana aims to teach women a holistic and spiritual approach to all relationships, based on their essential divine qualities.

Around the Bible in 80 Days: God’s Story from Creation to New Creation by John Mark Hicks (Leafwood, trade journal $16.99, ISBN 978-1-6842-6461-2). Theologian Hicks highlights points in the Bible that trace the history of redemption.

Guess I haven’t learned that yet: Discovering new ways to live when the old ones don’t work anymore. by Shauna Niequist (Zondervan, $26.99, ISBN 978-0-3103-5556-4). In her new memoir, Niequist describes dealing with chronic pain by engaging curiosity, cultivating acceptance, and relying on Jesus.

Reviewing Eternity: 27 Latter-day Saint Men Reflect on Modern Relationships edited by Holly Welker (Univ. of Illinois, $19.95 trade paper, ISBN 978-0-2520-8642-7). A series of essays by men of The Church of Jesus Christ of Latter-day Saints offer insight into the beauties and challenges of marriage today.

In Search of the Heart Sutra: Guided by a Magician, an Art Collector and Buddhist Sages from Tibet to Japan by Alex Kerr (Penguin UK, $17.95 trade paper, ISBN 978-0-1419-9420-8). Kerr consulted widely in his quest to understand an ancient Buddhist scripture advocating the idea of ​​emptiness.

No Crowns in the Castle: Building a Strong Relationship and a Harmonious Life by Fantasia Barrino Taylor and Kendall Taylor, with Hilary Beard (Worthy, $27, ISBN 978-1-5460-1263-4). the american idol— and the Grammy-winning singer and her businessman husband describe the challenges of fame, financial pressures and the premature birth of their daughter to share what they’ve learned about faith, marriage and family.

Magic in Merlin’s Kingdom: A History of Occult Politics in Britain by Francis Young (Cambridge Univ., $39.99, ISBN 978-1-3165-1240-1). Young argues that monarchs throughout British history feared hostile witchcraft and yet were drawn to astrology, alchemy and magic.

feathers of hope by Sharon Garlough Brown (IVP, $18 business paper, ISBN 978-1-5140-0062-5). Brown, spiritual director, speaker and author of several successful series, offers a new installment of her Shades of Light series, this time following retreat center director Katherine Rhodes and her great-niece, Wren Crawford, then that they endure sorrow and search for hope.

sea ​​glass cottage by Irene Hannon (Revell, $16.99 business paper, ISBN 978-0-8007-3616-3). Forgiveness is in question when Christi Reece comes to Hope Harbor – the Oregon Coast setting of many of Hannon’s books – seeking help from Jack Colby, who believes she has already betrayed him.

Black Angel by Brian Andrews and Jeffrey Wilson (Tyndale, $25.99, ISBN 978-1-4964-5139-2). This second book in the authors’ Shepherds series features a former Navy SEAL who joins the elite Shepherd warriors and is afraid that a former Shepherd has joined the enemy.

Shadows in the mind’s eye by Janyre Tromp (Kregel, business journal $15.99, ISBN 978-0-8254-4739-6). Tromp’s debut novel is the suspenseful story of a troubled veteran with visions and his worried wife, who misses the loving, responsible husband he once was.