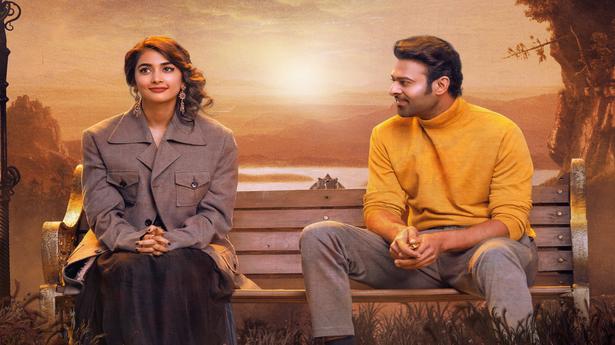 At the end of Radhe Shyam, what stuck with me were his picture-perfect frames that were painstakingly crafted to look like paintings. Cinematographer Manoj Paramahamsa, production designer Raveender Reddy, and costume designers Thota Vijayabhaskar and Eka Lakhani set the mood for an epic fairy tale. But how long can you soak up the atmosphere admiring the columns of light streaming through the high windows and the long corridors of the hospital and the houses in Italy? Of course, the film boasts of Prabhas and Pooja Hegde who have good screen presence. But the soul of the film, the story, is layered. What’s supposed to be a painful romance between two people racing against fate turns out to be bland and apathetic.

In this period drama set in the 1970s, protagonist Vikramaditya (Prabhas) positions himself as “the Einstein of palmistry.” His guru Paramahamsa (Krishnam Raju in the Telugu version; Sathyaraj in other versions) is consulted by a team of Indian space scientists before a mission. The guru understands a scientist’s skepticism of palmistry, astrology and related practices. He cites the example of the stars Arundhati and Vashista known long before they were discovered by modern science; there are things beyond human comprehension, he says, thus setting the tone for the events that unfold later.

Vikramaditya carries on the guru’s legacy and at the start of the film reads Indira Gandhi’s palm and predicts that she will declare an emergency! Later, there is a passing photographic reference of John Lennon taking Vikramaditya’s autograph. Radhe Shyam might have done away with the stunt sequences one would find in a feature film, but tries to create a halo around Prabhas’ character through such sketchy sequences.

Scratch under that layer of heroism and Vikramaditya emerges as a guy who submitted to the dictates of fate. The way he engages in casual relationships, which he refers to as “flirting,” is a clue that he is commitment phobic with good reason. Ultimately, of course, he falls in love when he meets the rambunctious but mysterious Dr. Prerna (Pooja Hegde), who also runs a relationship mile.

The beautifully mounted ‘Ee Ratale’ (composed by Justin Prabhakaran) serves to show how the two who are destined not to meet or fall in love continue to cross paths. In portions like this, the movie manages to create some magic. Vikramaditya and Prerna’s courtship unfolds amid clues about what makes them who they are. It is also punctuated by banal comic portions in a hospital ward.

The movie wastes a bunch of talented actors, having them just sit back and utter a line or two. At least Sachin Khedekar has something to do. Jayaram, Jagapathi Babu and Priyadarshi are wasted. The most wasted is Murali Sharma, and that one also struggling with a bad wig. Kunaal Roy Kapur and Bhagyashree have little to do and may have been roped in to be familiar faces for Hindi audiences.

For the first hour or so, the aesthetic visuals, music (background music by SS Thaman), and lead actors who are made to be perfect, accentuate the dreamy setting. Pooja Hegde looks like the princess and in later parts shows a glimpse of her acting potential waiting to be tapped. Prabhas is effective in his portrayal, but there’s not much in the story or characterization that challenges him as an actor.

When the conflict between fate and love takes center stage, the film begins to lose what little charm it had. The biggest problem with Radhe Shyam is that it never sucks you in. The ship sequence at the end of the film sinks an already flimsy film, though Prabhas was tricked into scaling a tall ship Baahuba-style.

Parallels with Mani Ratnam Geethanjali are also difficult to shake. The two lovers’ journeys against what fate has in store for them can be seen as a tip of the hat to this iconic romance. While Geethanjali also rolled on a premise that required suspension of disbelief, it was all heart and rooted us for the protagonists. Radhe Shyam could have benefited from some of that soul in his writing.