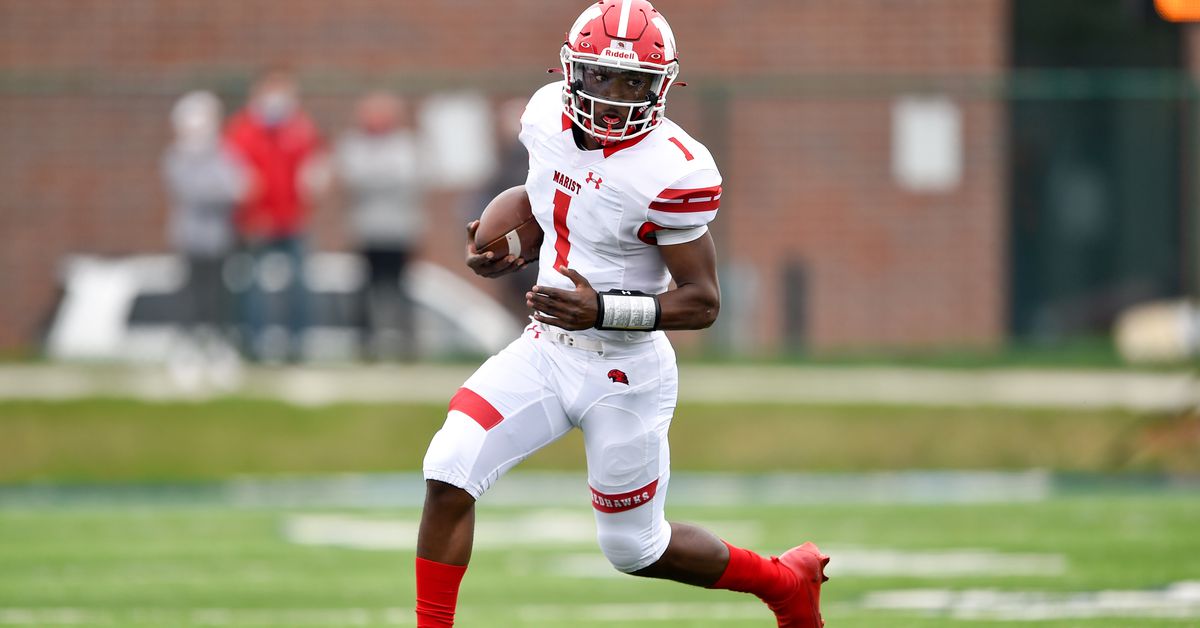 High School Football: A Look At The Best Matches Of Week 6

This is the second round of the CCL / ESCC Blue calendar and while this game won’t make or destroy either team’s season, it has some interesting storylines nonetheless. Loyola (5-0, 1-0) took part in aerial fights two weeks in a row, winning a thriller 46-43 at Brother Rice, then edging Fenwick 27-24 on second-year placement from Michael Baker at the end of the allotted time. The Ramblers have proven they can win without star running back Marco Maldonado, who is out at least until the playoffs with a broken collarbone suffered in the game with Rice. Mike Regan was the next man, running for 172 yards and a touchdown. Marist (4-1, 0-1), led by Coastal Carolina-linked quarterback Dontrell Jackson Jr., is on the hunt for a signing win after losing his league opener 28-16 at Mount Carmel two weeks ago.

The question here is how Mount Carmel (4-1, 1-0) comes out after last week’s historic loss to St. Ignatius. Caravan’s offense was ruled out for the first time since a 7-0 playoff loss to Glenbard West in 2015 after securing great wins over powers St. Rita, Phillips and Marist. Rice (4-1, 0-1) presents a tall order with a defense that allowed just 26 points apart from Loyola’s loss. Junior lineman Roderick Pierce, who has offers from Illinois and Kentucky, is a force on that unit, while Notre Dame-linked Jack Lausch is one of the first quarterbacks in the State.

Glenbard West (5-0, 2-0 West Suburban Silver) has yet to be tested, with an average victory margin of 47 points. Joey Pope has set up big numbers for the Hilltoppers, whose schedule is loaded with conference tests against York (5-0, 3-0), Downers North (4-1, 1-1) and Hinsdale Central ( 4-1, 2-0) over the past four weeks. York hasn’t qualified for the IHSA playoffs since 2011, but appears to have made the leap under the guidance of fourth-year coach Mike Fitzgerald. The Dukes have an experienced offensive line and a solid linebacker corps led by senior Jeff Coglianese.

Three weeks after the start of DuKane’s game, Batavia (5-0, 3-0) is the last undefeated team. The Bulldogs have a knack for winning the tight games this well-rounded conference specializes in, beating No. 12 Wheaton North in overtime and stopping a potential conversion try-winner by No. 24 Glenbard North last week. As usual, it’s the committee’s offense for Batavia: Second-year quarterback Ryan Boe made 43 passes to seven different receivers for 759 yards and Jalen Buckley rushed for a top 551 yards and five touchdowns. WW South (3-2, 2-1) recorded three interceptions and four quarterback sacks – two by senior lineman Charlie Hoover – in last week’s win over St. Charles East.

Kenwood (5-0, 2-0 Illini Red Bird) gets his first serious test in his attempt to win one of the top two sections in the Public League. The Broncos have Division I prospects on both sides of the ball with defensive back Diego Oliver (commitment from Eastern Illinois), wide receiver Logan Lester (offers from Nebraska, Kansas) and linebacker BJ Mayes, among others. Morgan Park (3-2, 2-0) has one of the state’s top sophomores with wide receiver Tysean Griffin, who owns the SEC offerings for Arkansas and Tennessee.