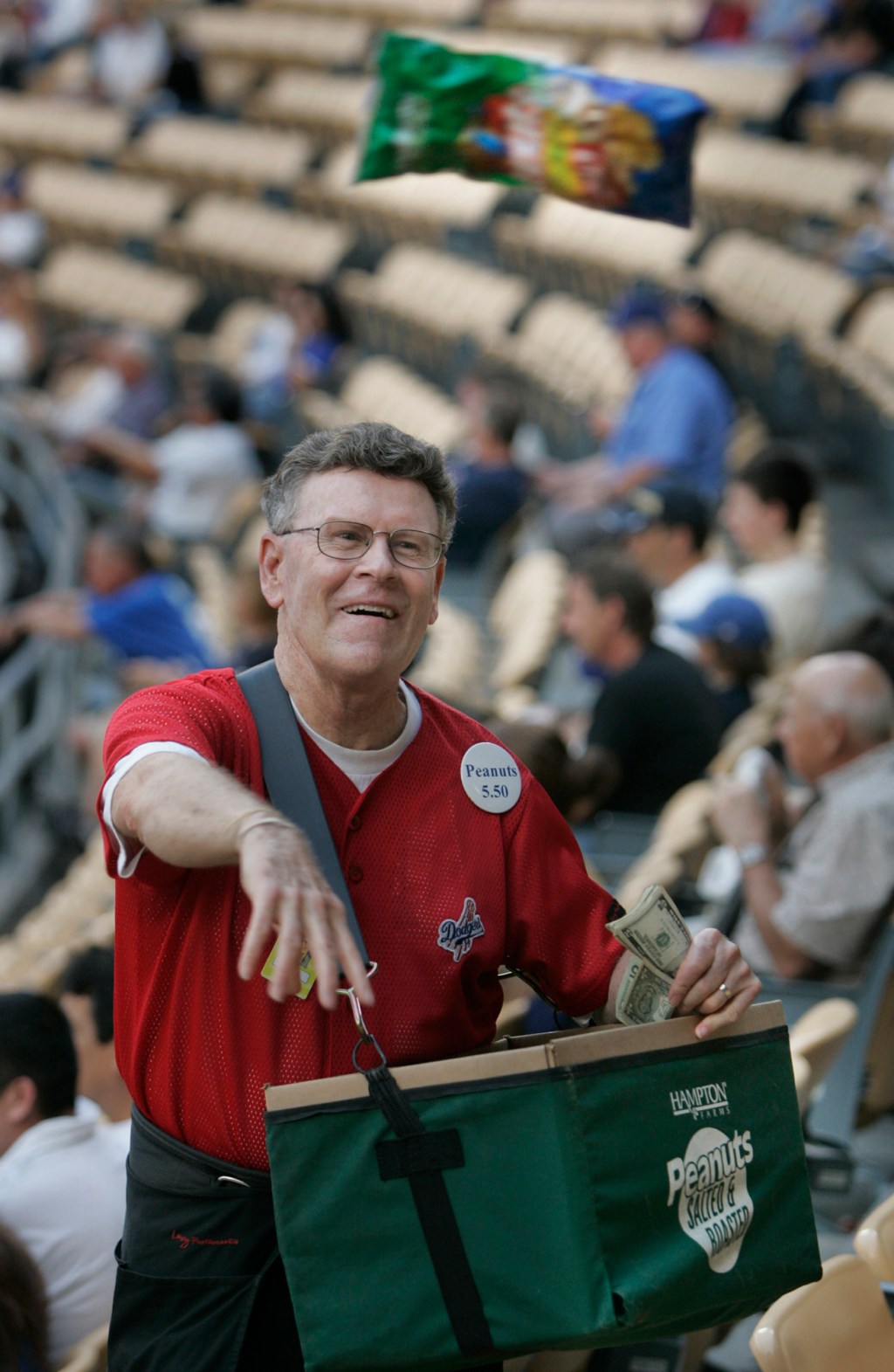 He made his name throwing peanuts at Dodgers games. It’s a no-no now. –Boston Herald

LOS ANGELES — You can admire the Dodger Stadium broadcast booth, but you won’t see Vin Scully there anymore. Next year you won’t see Jaime Jarrín there.

You can buy a Dodger Dog, but Farmer John no longer makes one.

And, among Dodger Stadium’s list of dying traditions, this one just arrived: You can buy a bag of peanuts from Roger Owens, but he can’t throw the bag at you anymore.

It’s an “Only in LA” story: the famous peanut seller who can throw a bag of peanuts behind his back or between his legs.

Owens threw peanuts at presidential inauguration festivities, on “The Tonight Show,” and in two movies and three television series in which his role was always the same: peanut seller. His wedding guests included then-Los Angeles mayor Tom Bradley and Dodgers Hall of Fame pitcher Don Sutton.

“I would have a hard time hitting a wall 15 feet away if I tried to throw a bag of peanuts behind my back,” Sutton told the Los Angeles Times in 1976. “It’s definitely easier to throw punches with a baseball.”

Owens still throws peanuts at the lodge level, at fans who have become friends over the decades. Several of those fans contacted The Times to say that Owens had been ordered to stop throwing bags of peanuts.

Just hand them over to the customer, please. The show went dark.

I called Owens to see if that could be true. Yes, he said, it is.

“I’m so heartbroken about this,” he said.

At Dodger Stadium, it is an attraction in itself. He’s been throwing peanuts since the stadium opened in 1962 and at the Coliseum before that.

Old fans urge him to show off his tricks to new fans. The adults buy a bag for Owens to throw at a child. Smiles all around.

Levy Restaurants manages Dodger Stadium concessions. If fans asked why he couldn’t throw his peanuts anymore, Owens said Levy’s reps told him to say the decision was made for fan safety. That’s indeed what fans who contacted The Times said Owens told them.

Owens is not provocative. He is sad.

He doesn’t want to fight Levy or the Dodgers. He loves his job. He just has a hard time understanding why a bag of peanuts is a problem.

“They have time to see it coming,” Owens said. “It’s not a bullet that goes straight through. I always want to make sure whoever I throw to gets the bag of peanuts.

“I want them to grab it, because they feel a sense of accomplishment.”

I asked Levy to explain the reason for the change, and particularly the timing, since Owens has been throwing peanuts for decades. I asked if Levy had considered a possible compromise, perhaps a maximum distance for Owens throws. I asked if Levy knew of any injuries from flying peanut bags.

Levy’s spokesman, Kevin Memolo, did not respond, nor did either of the two Levy reps with whom Owens said he met.

Dodgers spokesmen Steve Brener and Joe Jareck did not respond.

To the extent that legal liability might be involved, Levy and the Dodgers argued in court that fans bear all risk of attending a game.

In a case in which a fan sued because he was injured by hot coffee spilled on him at a concession stand, Levy and the Dodgers cited ticket wording last year that cleared the entities from any liability for incidents “before, during, or after, actual play of the game, including, but not limited to, danger of being injured by players, other fans, bats thrown or parts thereof, thrown or hit balls or other objects or projectiles.

This language also appears in the Dodgers’ 2022 ticketing contract. A thrown bag of peanuts, you might say, is a projectile.

In at least two cases – in 1976 and 1985 – bans on throwing peanuts were introduced and later repealed.

It’s not about Owens’ identity as a peanut thrower, even though his biography is called “The Perfect Pitch” and his email address includes the words “peanut man.” It’s about a small human connection in this big city, forged between one man and decades of Peanut-loving fans at the lodge level.

Hopefully he, Levy and the Dodgers can come to an agreement that will stop other salesmen from imitating him and allow him to close out his career in his familiar style. Owens is 79 years old. He won a grandfather clause.

What you should know about payday loan ads on social media