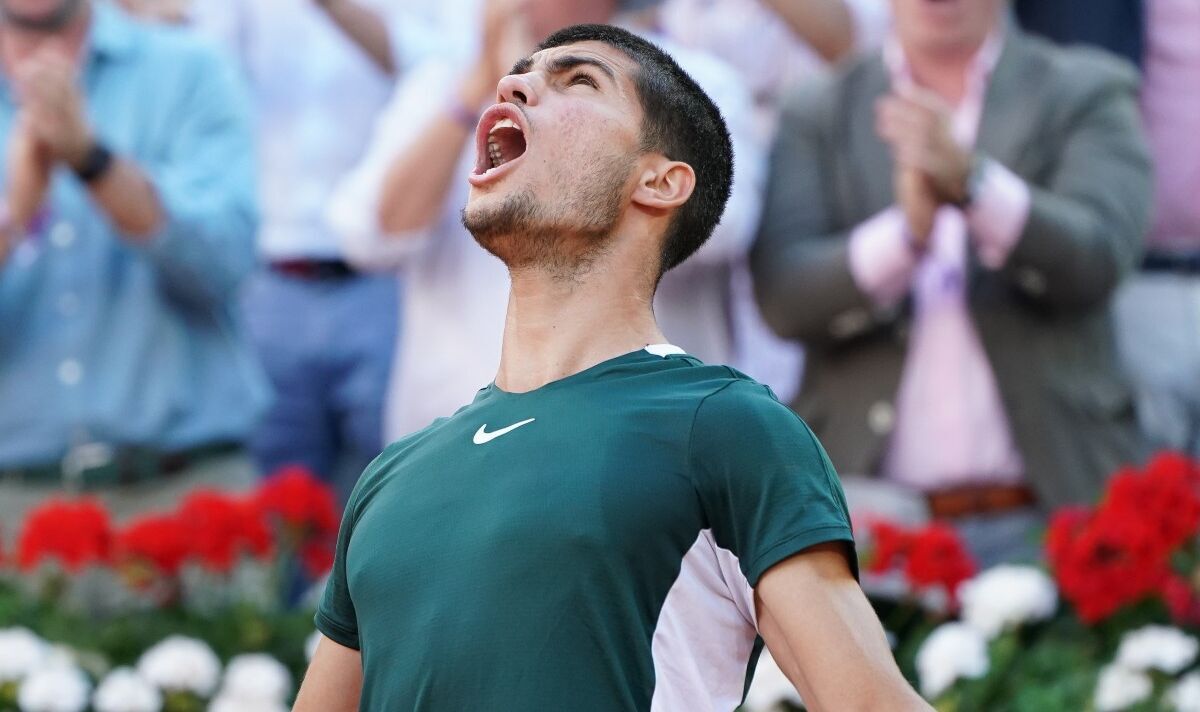 Teenage Spanish sensation Carlos Alcaraz begins the French Open as the second favorite – and a prime target for other suitors’ mind games. The world No. 6 has won four titles this year, including his last three Masters in Miami, Barcelona and Madrid.

The 19-year-old beat Rafa Nadal, Novak Djokovic and world number 3 Alex Zverev in back-to-back stunning matches to win the title in the Spanish capital and show he is the sensation of the sport. It’s not exceptional for a Spaniarad to lead the ATP Tour in winning percentage on clay in the 52 weeks leading up to Roland Garros with Nadal dominating on the surface since his first victory here aged 19 in 2005.

Alcaraz is 23-3 on clay over the past year and has won more titles (four) than it has lost – and is 16-1 on red clay this year. When he won on the hard courts of Miami last month, he knocked Real Madrid off the front page of sports daily AS with the headline: ‘The Alcaraz era has begun’.

There hasn’t been the same excitement for a young male player at Roland Garros since Nadal’s debut in 2005. And many comparisons have been made between the Mallorcan and the boy from El Palmar near Murcia.

But Justine Henin told Belgian newspaper Le Soir: “The comparison with Nadal, for me, doesn’t hold water. For me, there seems to be a good mix of the big three. In terms of the game, Carlos Alcaraz still seems more complete than Nadal, Federer or Djokovic.” While Nadal beat opponents with his forehand early in his career, Alcaraz has a more rounded game with better serve and smart use of drop shots and lobs.

But 21-time Grand Slam winner Nadal, whom Alcaraz grew up idolizing, said: “If he can win 25 Grand Slams, that will be great for our country, but let him enjoy it. I have been able to manage my career the way I wanted. , now is the time to let him too. Don’t ask me the question again, because I will give you the same answer every time. You can’t put more pressure on him.”

Alcaraz did no pre-tournament media in Paris. But others were willing to talk about the Spanish teenager and start mind games against a player who passed the third round of a Grand Slam for the first time when he reached the last eight in New York. And they were keen to point out that winning a Major is another big step.

In his press conference on Friday, defending champion Djokovic said: “Best of five, obviously things are different. I think the Grand Slam awakens so much motivation and emotions in a tennis player. That’s why you can’t underestimate anyone and probably not compare the performances of these players in another tournament with the potential performances here in a Slam.

World No.2 Daniil Medvedev said: “Carlos has been playing amazing lately. Miami, Rome, Barcelona. Let’s see how he handles the pressure. If he manages to reproduce the same tennis, he will certainly be one of the favorites.

Nadal and Djokovic are due to meet in the quarter-finals with Olympic champion Zverev lined up to face Alcaraz in his section. The German, who is also looking for his first Grand Slam title, said: “It’s very different in Grand Slam. And I think it takes a lot more than playing good tennis to win a Grand Slam. I think it will be interesting for promising new players, like Alcaraz, and I was in the same position as him a few years ago, and I think Stefanos Tsitsipas was too.

“Medvedev started playing better later on, so for him maybe it was easier because he was more mature. But it will be interesting to see how he handles that.”

How much can £10 get you to play the star sign games at Fabulous Bingo?