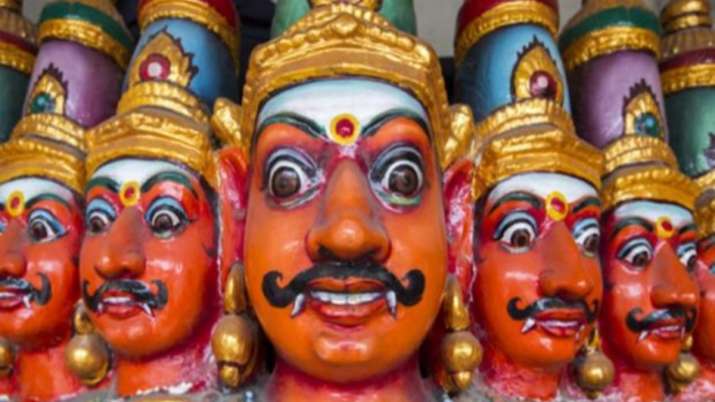 Vijaya Dashmi, also known as Dussehra 2021, is one of the important festivals for Hindus, which falls on the 10th day of Sharad Navratri. It marks Lord Ram’s victory over the demon Ravana. The ten-headed demon king of Lanka, was one of the central figures of the Ramayana, yet most people are unaware of his past, his conquests and his learned knowledge.

1- Ravana was half Brahmin and half demon. His father was Vishwashrava, a rishi belonging to the Pulastya clan and his mother Kaikasi was from a demonic clan. He was originally called Dasagriva, that is, the one with ten heads. Vishwashrava had two wives – Varavarnini and Kaikasi. Kuber, the god of wealth was born from the first wife, and Ravana, Kumbhakarna, Shurpanakha and Vibhishana were born from Kaikasi.

It was Ravana and his brother Kumbhakarana, who did penance, obtained miraculous powers from Lord Brahma and drove Kuber out to occupy Lanka.

2- Ravana was called Dashagriva or Dashanana (ten-headed demon). While trying to dislodge Mount Kailash that Lord Shiva was meditating on, God pressed down on the mountain with his toe crushing Ravana’s forearms. Dasagriva uttered a loud cry of agony, which earned him the name Ravana, which means “one who roars or cries”.

He then became one of Lord Shiva’s greatest devotees and composed the Shiva Tandava Stotram. Delighted with his devotion, Lord Shiva presented him with an invincible sword called Chandrahasa.

3- Ravana had killed King Anaranya of the Ikshawku dynasty to which Lord Rama belonged. While dying, King Anaranya cursed Ravana saying that King Dasaratha’s son would end up killing him. This is why Dussehra marks the victory of Lord Ram over the demon Ravana.

4- Also, Ravana tried to kill the monkey king Vali, who was praying to the sun god by the sea. Bali was so powerful that he carried Ravana with his arms and brought him back to Kishkindhya. After Ravana’s defeat by Vali, the two became friends. It was Vali, who while fighting with Sugriva, was killed by Lord Rama.

5- It was Ravana, a Brahmin, who performed the rites of a purohit, when Lord Rama built the Rama Sethu to lead his brigade of monkeys to attack Lanka.

6- Ravana was not only a formidable fighter, but also an expert of the Vedas and an expert in astrology. It is said that when his son Meghanada was to be born from the womb of his wife Mandodari, Ravana “asked” all the planets and the Sun to be in their proper position for the auspicious “lagna” so that her son would become immortal. . But Saturn suddenly changed position, which infuriated Ravana and attacked Saturn with his mace and broke one of his legs, crippling him for life.

7- Ravana was a great practitioner of the art of governing. When Lord Rama killed Ravana, who was on his last breath, Rama asked his brother Lakshmana to go to Ravana and learn the art of politics and diplomacy from the dying demon king.

8- Ravana, after a thousand years of penance, sought a boon for the immortality of Lord Brahma, but the latter politely refused saying that his life would be focused on his navel. Ravana’s brother, Vibhishana, a devotee of Rama, knew this, and on the tenth day of the battle, he told Rama to strike his arrow on Ravana’s navel, killing the demon king.

9- Ravana had acquired a favor from Lord Brahma by begging that no god, demon, kinnar or gandharva could ever kill him. He obtained this favor, knowing little that he did not seek the favor to protect himself from human beings. It was Rama, as a human, who ultimately killed Ravana.

10- Ravana not only usurped Kubera’s kingdom of Lanka, but also his golden Pushpaka Vimana. It is said that the vimana (airplane) could take different forms and travel at the speed of the mind.

“We beat Chennai twice in round games”: head coach Ponting says DC “will be confident” in qualifying 1 | Locust