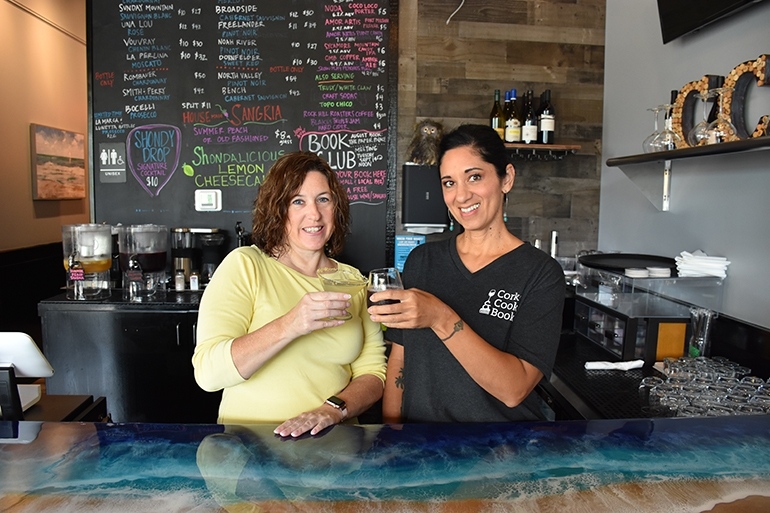 Opening a wine bar and bookstore has always been a dream shared by friends Mindy Kuhn and Shonali Thomas – they just didn’t know it until it showed up. After combining their passions and professional adventures, the caterer and publisher have teamed up to open Corks, Cooks, & Books.

Tucked away in the Millwood Mall on Herlong Avenue in Rock Hill, the new location combines casual tapas with a wine bar and bookstore, creating a new hangout that allows patrons to have a drink and settle into a good reading.

Kuhn met Thomas when the latter published her book, Shonal’s cuisine: a healthy dose of indulgence, through Kuhn’s publishing house, Warren Publishing, in 2017.

The two became friends over time, and it often happened that they both wanted to expand what they were already working on; Kuhn wanted to add a commercial aspect to his publishing house, while Thomas envisioned a wine bar with small bites in addition to his already thriving catering company, SplenDishes Kitchen.

â€œI wanted to be able to add something more and different that sets us apart from other independent bookstores in the area, or just gives us something to look different,â€ Kuhn said.

The two were once discussing their respective wine businesses when Thomas added that she had also considered opening a brick and mortar store.

â€œI always wanted to have a small wine bar type plate where we could just serve cold cuts,â€ Thomas added. â€œNo restaurant, just small bites and stuff like that. So, we were talking about how we could put these two things together, and what a great concept that would be. ”

Soon after, the idea for Corks, Cooks and Books began to take shape. But as with any new concept, there was a lot of work to get it started.

Thomas and Kuhn looked around, but quickly realized that a home within their budget wouldn’t have enough room for a full kitchen, staff, and cooking classes, while the industrial space available would not have the inviting atmosphere they wanted.

â€œWe were just waiting for something to show up, which was extremely difficult when finding a second-generation restaurant during COVID,â€ Thomas said.

They eventually found the perfect spot on Millwood Plaza in Rock Hill which included a huge patio perfect for relaxing, sipping handcrafted wine cocktails, and listening to live music.

Thomas pulled popular small dishes from his restaurant business and cookbook to create the menu for Corks, Cooks, & Books. She was inspired by a desire to bring people together around shareable plates.

â€œI love going to a tapas restaurant where you can grab things and you’re with a bunch of friends or your family and you get three or four different dishes, and everyone eats and shares,â€ he said. she declared.

She said she had already received positive reviews for vegan and gluten-free items on the menu.

â€œEverything is made in-house and we accommodate dietary restrictions, but you couldn’t really tell they were vegan or gluten-free unless we told you,â€ she added.

One of the most popular items Thomas offers at Corks, Cooks, & Books is Gluten Free Cheesecake. She makes the crust with salted caramel pretzels and puts a lemon curd cream cheese cake on top.

Other items include a seasoned salted caramel brownie, vegan black-eyed pea donuts and a signature charcuterie board – that pair well with local craft beers, wine-based cocktails, and artisan sangrias. The Shon-dy Drop, for example, is a wine version of a lemon martini, made with custom lemon cocktail syrup.

While Thomas takes care of the kitchen, Kuhn focused on transforming the space to hold books of all kinds. – romance to mystery to cookbooks to children’s books. Kuhn said his mission is to have something in stock for everyone who walks through the doors.

She keeps abreast of book clubs, bestseller lists and, of course, her own authors at Warren Publishing to organize the collection. The staff have been very involved since the store opened in mid-July, allowing Thomas and Kuhn to run their other businesses.

â€œOur staff are getting to the point where they can take care of everything,â€ Thomas said. â€œAnd that’s a great thing. Our staff are amazing.

The duo already have an eye to the future, considering where to take the corks, cooks and books next.

â€œWe would love to be able to expand into the space next door if we can, even though we only talked about it yesterday, and we liked being a little small and poignant and different,â€ Kuhn said. “We want to continue to evolve to be the favorite place of the neighborhood, we want people to just come to read, drink and go out.”

Become a Nerve member: Get better connected and become a member of Queen City Nerve to support local journalism for as little as $ 5 per month. Our community journalism helps you stay informed through a range of diverse voices.